The old world of doing business, communication to each other and gaining information on all spheres of life has fundamental changed. To define it abstract, the world sustains a new layer on nearly everything, this layer can be called internet, but what fits better is the item of global data streams.

In order to refer to the content of Module 1, the three dimension of sustainability

gets affected by the rapidly ongoing process of connection and networking between clients, providers and backbones. This developed may result in good outcomes or not. The work of this case study will examine this development critically and will show its current global progress and local impact, as well as the potential future prospects. In preview social life has been strongly influenced by an evertime information availability on every kind of topic. People can gain information of substances of products, but also the problem of high traffic online shopping occured. The global data streams also increased global businesses and sellings from one country to a huge amount of other countries and vise versa. This enlarged the prosperity generally but also enlarged the use of fossil fuels to carry goods from point to another point on earth real far away.

To be more speficic, the main focus of this paper will be set on the changed international flow of commodity. Cointainer Shipping across the oceans, heavy goods vehicles on ramified highways and air express services for hight tech products or perishable products, increased extremely over the last decades. Especially the new prospects of high developed information technologies gave a strong stimuli to world trade and changed supply chains of companies sustainable. 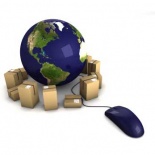 There is a short definition of what is going on, it is overall called "The Internet of Things". This is a high developed ongoing process of accelerated transportation systems.

"From the RFID tags now embedded in everything from soda cans to the family pet, to smart buildings that subtly adapt to the changing flow of visitors, to gestural interfaces like the ones seen in Minority Report, computing no longer looks much like it used to. Increasingly invisible but present everywhere in our lives, it has moved off the desktop and out into everyday life affecting almost every one of us, whether we’re entirely aware of it or not." - Everyware: The Dawning Age of Ubiquitous Computing, 10/03/2006, Adam Greenfield

This case study has its demand to analyze the good and bad influences of this evolution in trading markets on customer behaviour, the resultant ecological impact of growing carriage of goods and for sure the influence on economic activity.