Day Two: School participants walked to Jezeří Castle and were taken on a tour of the castle by the castle custodian, Hana Krejčová. A lunch of beer and sausages was followed by a walk down below the castle to view slips caused by nearby mining at the Czechoslovak Army Mine. The evening activity was a discussion with a panel of local experts on local issues, including well-known local personality and former deputy mayor of Svatá Hora Kateřiny, Petr Pakosta, the current mayor of Hora Svaté Kateřiny, Hana Řebíková, and the current deputy mayor, Lukaš Pakosta. 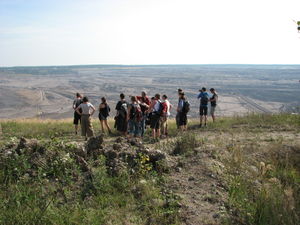