Day One, 3 September 2011: all but one of the students (5 Czechs and 8 Germans) and most of the course facilitators arrived at the

ISPoS Summer School arrives in Most

train station in the town of Most by approximately 3pm. The remaining student was picked up by car on the German side of the border not far from Svatá Hora Kateřiny. A mini bus transported everyone to the villge of Svatá Hora Kateřiny and delivered them to the Eurorellax hotel. After settling in, formal introductions were made and the facilitators provided an overview of the week's activities and expectations of the week's work. Students participated in a team building exercise by grouping together to recreate geographical maps of the Ore Mountains from various pieces of map and everyone introduced themselves by creating their own 'coat of arms' that represented their lives and plans. The final activity of the evening was watching the documentary called 'Ženy SHR' or 'Coal in the Soul' by Martin Dušek and Ondřej Provazník with English subtitles created especially for the Summer School http://www.ceskatelevize.cz/porady/10213538176-zeny-shr/. 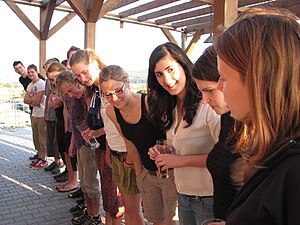 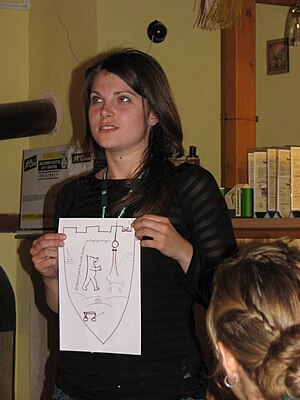 Students introduce their 'coats of arms'

Students explain their coats of arms
Retrieved from "https://vcsewiki.czp.cuni.cz/w/index.php?title=Students:Day_One&oldid=4734"