Bo Jensen produces hand crafted fresh goat cheese in a small building located on a goat farm in Aurenes, outside Undheim, in Jæren, Rogaland, in the Southwest of Norway. He employs very fresh, unpasteurised goats milk produced by the farmers who own the farm where his production facility is located. In business for approximately five years now (2017), his fresh goat cheese has won at least three national awards for its quality, provenance and taste. A trained, experienced Pastry Chef working in Norway, he first worked part time as a consultant to the existing farm cheese business, but after winning an important prize for the cheese in 2011, eventually took the business over, making it his main economic activity.

Bo Jensen was already a qualified Pastry Chef, working in Stavanger. His reputation as a chef led to his involvement with an existing cheese production business, but that business was struggling. At first he operated as a part time consultant, and then producer. After winning a Norwegian national prize in 2011, he became more involved with the cheese business, eventually buying it outright and operating it himself. 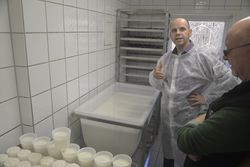 The idea behind the business is about the supply of local food and local products, in this case, a traditional product which was farm-produced, and which has mostly gone out of production due to the industrialization of the Norwegian dairy sector, and also due to a ban on the off-farm transport of unpasteurised milk.

His products: “FjellTopp” and “LilleAske” (‘Mountain Top’, and ‘Little Ash’), both fresh white cheeses made from unpasteurised goats milk, represent part of the cultural heritage of Norwegian mountain farming (‘seter’ or ‘alpine dairy’ farms). These cheese products were far from uncommon historically, as small farm producers supplemented and added value to the raw commodities (i.e. milk) that they produced. Also, goat and sheep dairy farming used to be far more common than it is now, due to the location of many farms in the rugged mountain areas where these species thrive. Modernization and industrialization of cheese production has made these products marginal to the main grocery market in Norway as they have neither the volume, nor access to distribution systems of the industrial suppliers.

Jensen’s idea was to produce traditional fresh white goat cheese of the highest quality, and to market it direct to high end consumers and high end users such as chefs, hotels and other outlets which focus upon small volume, high quality food products. In this way he builds demand within a sector he already knows and is known well within, and can charge higher prices reflecting the special qualities of the product.

Risks and positive moments in the implementation process

This business was based upon much experience, and reputation which the owner developed in the food industry, not only in Norway, but internationally. His knowledge not only of making food, but of the food and hospitality industry helped him devise a strategy which was successful. In particular he identified the importance of marketing to a targeted potential market. That market was one in which he had previously worked. Using this experience and knowledge he was able to take over a struggling business and make it a success.

He received support from Innovation Norge (a Norwegian QUANGO which supports business start-ups) to help grow the business. For many start up businesses, attracting this type of funding is a challenge and again, the owner's experience working in the industry will have helped make his application successful. The funding included support for a comprehensive market survey which gathered the information and contacts he needed to expand the market and make the business viable.

Bo Jensen works very intensively, usually starting at 5 o'clock in the morning (each day he produces one batch of cheeses). This allows him to spend his day selling his cheese. In total, the business produces about 2 000 cheeses every month; It's not a lot of volume, but it is a lot of work. In order to make it worth while, the individual cheeses have to be of highest quality and attract high prices. In October, however, there is an end of the season as the goats stop producing milk. Then comes time to develop the rest of the business.

On one hand, the lot of a hand-producer of food is difficult – Bo Jensen works long days, starting as early as 0300 in order to produce the cheese (he normally produces a batch every day). This gives him time during the business day to market his cheeses.

He produces approximately 2000 individual cheeses per month, from April to October, when the goats stop giving milk. A single daily batch produces approximately 60 kg. of cheese. He is able to price his products to make it worth his time because he is selling to a high value market – restaurant chefs who transform his products into even higher value items. At the same time, by marketing the product as local, unique and award-winning, he retains its special local nature, allowing him to keep his prices high enough to make it worth his time to produce them.

The relationship of the entrepreneur to the environment and the community 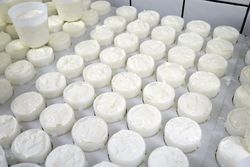 For Bo Jensen, there are two key relationships. The first is between himself and the farmers who produce the goat milk. His workshop is located on the farm, and he relies both on the professionalism of the farmers and their willingness to work with him to make the business a success.

The second is between himself and his market. Here, he was already a part of a loose community of high end chefs in the Stavanger region, and so already had entry into this network of people. Secondly, he is a very active user of social media, daily posting and sharing others’ posts about his products. Thus, he is able to build a large network of potential ‘customers’ across the whole of Norway -- a network large enough that even if only a few social media ‘friends’ become customers, there are enough of them to make the business worthwhile.

He also participates in every initiative to promote local food that he can. In this way, he maintains a high profile in the innovative and special food marketplace in the SW of Norway. An example of how this can work is his recent demonstration of his cheeses to the Norwegian King’s Chef. By associating with the Royal family, he is implicitly highlighting the high quality of his products. This is especially worthwhile amongst the community of high-end Chefs, as they know the quality of produce which is required for Royal kitchens. 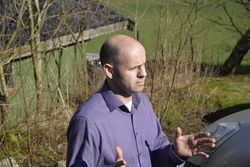 It is clear that Bo Jensen takes a lot of satisfaction from the success of his small business. He produces his cheese by hand, in a regular process of production which he likens to ‘meditation’, particularly in contrast to the busy and frenetic activities of marketing it. It is clear that he takes a great pride in making these products -- in producing a special local product which refers back to an earlier age where small scale cheese works were more common in Norway, whilst at the same time, repurposing the processes to produce for an exclusive 21st Century market which value such sustainably produced food products.

Mr Jensen finds his work very interesting. Every day is different and never knows what's waiting for him at home - phones, mails, etc. He enjoys the variety and the challenge, and of course, the success of the thing that he produces.

Thanks to the direct link between the goat farm (operated by other businesses) and the cheese factory, it is possible to use non-pasteurized milk which can not otherwise be sold or taken out of the farm. The direct location of production in a mountain farm environment is therefore a necessity for the entreprise, and one of the basis for success. The cheesemaker does not live in the place of production and must commute daily.

The basis of business is the unique experience of Bo Jensen. The operation itself - a cheese factory - is a small building (originally a container for long-distance goods transport). The whole area is quite limited and the devices are simple. As a very important factor in the proper production of cheese, Mr. Bo Jensen employs very strict standards of production hygiene.

Bo Jensen uses social media to expand the range of people who know about his product, and especially to target those who might use it – restaurants, specialist food distributors, etc. He posts several times daily, both his own posts and re-sharing those from others, were relevant. He also encourages others to share his posts.

He also posts many photographs which pervade the media-sphere. Further, he has given a number of interviews to Norwegian media, both local and national, around significant events in the business’ history such as the winning of prizes, or the featuring of his products in significant food-events. And, of course, he also has worked with the print media to get the news of his products out to a wider population. 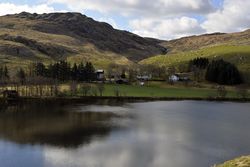 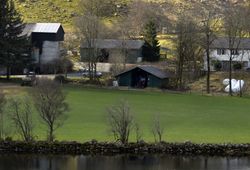 Production building from the lake

Although Bo Jensen was not specifically trained as a cheese maker, his formal training as a Pastry Chef, and other similar certificate courses he has completed, have, he says, had a large contribution to his ability to create a production process which delivers extremely high quality cheeses, as well as consistency in product and innovation in design. He did briefly study with a French cheesemaker, but claims that most of the knowledge which goes into making his cheese came about from the interplay of ideas from other activities (restaurant and patisserie cooking) with hands-on experimentation and development of the product. What is important, is to be able to recognize quality and uniqueness in a product, and once developed, to create a process which produces enough standardization to serve a specific market.

This page is based on personal interview of Jana Dlouhá, Jiří Dlouhý and Rhys Evans in with Bo Jensen in April 2017