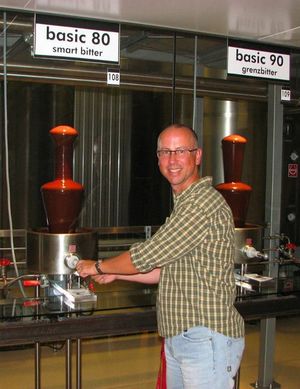 Andrew in the Zotter factory

We went on a tour of the Zotter chocolate factory in Styria. We were fascinated and we thought about a similar project in the Czech Republic. Does it sound crazy?

A brief history of chocolate & the situation in the Czech republic

Chocolate flows through the history of mankind. Many nations and civilizations planted cocoa trees in the 5th century. But at the very beginning hot drinks only were made from the miraculous fruit of this tree; these drinks were made for high society. The first attempts to make the chocolate bars that we know nowadays, date back to London in the 17th century. However, the real success came in the late 19th century. This time the first Czech chocolate factories are founded – Rüger, Zora in Olomouc or the Maršner factory which was the flagship of Orion. These factories still exist, but they have become part of the international group Nestlé. In the beginning, cocoa beans were even roasted at the Zora factory, but then it became cheaper to import them.

Today, we can find a couple of small chocolate companies in Czech republic that make food products on order (Fikar Kuřim, Chocogastro Pustiměř, Carletti Vizovice, Kamila Chocolates), but mainly they do not produce their own chocolate - they use German, Italian, French and other European ones. None of them are organic or have fair trade certification. In Czech shops, foreign labels like Rapunzel, Vivani or Mascao are sold, which defines the standards for all participants in the chain. And the consumption of chocolate in general is becoming grater every year: every Czech eats more than 5 kilograms per year.

The success of the Zotter chocolate factory

Josef Zotter founded his enterprise in 1999 after an earlier enterpreneurial failure with a café chain. Zotter managed to find an interesting reason why people buy chocolate - they sought experience and value-added more than just something sweet to eat. Key elements of his success are:

Nowadays, over 200,000 visitors come each year to visit the Zotter "chocolate theatre" and the experiential trail through the factory where you can taste an enormous number of chocolate flavours and watch all the parts of the chocolate-making process. One can think - what is actually sustainable about the Zotter chocolates?

The Idea of Regional Chocolate ©

Our group decided to design a chocolate factory for the Czech market. It is necessary to transfer the model from Austria to our conditions. Of course, we cannot think about the same attraction of products for Czechs and Austrians. The company should be built like a strong brand for a real Czech chocolate factory with principles of sustainability. It should be based on local production, for each region of Czech Republic there will be a special taste of chocolate with especially interesting pictures on the cover. The pictures will be also very closely connected to a region. They should be an attraction particularly for tourists but as very nice gifts for Czechs. They will be sold like a tourist stamp in tourist centres. And it will also be a great presentation for regions abroad. A flavour of blueberries

Every year before Christmas there will be a new flavour. Every city or village should eventually its own chocolate flavour. There will be a competition declared for the best collectors of covers and special prices for those who collect all the flavours/regions. We want to use cocoa beans at least of fair trade quality and later of organic quality - this will not be the main marketing issue because it is not so important for the Czech market right now, but it is an important issue of sustainability. Chocolate has to be financially available for Czechs, but also of adequate price for higher quality products.