The theme of developing countries is important in the globalization debate – they are often considered to be witnesses to global economic development fuelled by multinational corporations. Mineral resources are traditional sources of income in these countries not requiring great input of know-how to profit from its export.

This is a complex phenomenon and can be viewed from different (disciplinary) perspectives. Our viewpoint: direct impact at the local level – on the quality of life in diverse parts of the world. 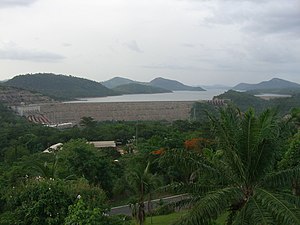 Volta view of the dam

Economy – the driving force of globalization processes. However, the economy looks different from the global and local perspective: due to on-going trade liberalisation and increasing opportunities for investment across national borders, the global production and distribution network have become even more interconnected, their efficiency has increased, and they no longer take heed of boundaries and borders; the globalised economic maximizes its profit but also brings cheap goods to underdeveloped regions. However, from the local perspective, globalization economic processes might block local initiatives as it neglects local specifics – social, cultural and political conditions, and of course the traditional economy based on those same conditions. In the past, tariffs would have been imposed on imports in developing countries in order to nurture and incubate local industry and hence protect it from foreign competition, just as new industries had once been protected in developed societies, but the demands of the global economy and the World Trade Organization require opening up markets in developing nations to the full force of global competition. Globalization in a certain sense means universalization, and its economic imperatives destroy local diversity which often means neglecting local consumption needs or patterns. Local people are perceived as the “labour force” – economic characteristics are important but traditional skills are not valued any more. 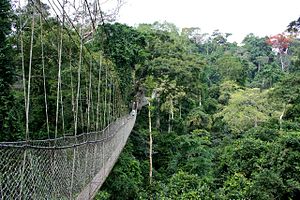 So, an economy which is a driving force for development in terms of GDP growth is not usually accompanied by cultural development, which is a local matter, but generating educated and motivated citizens to cope with its challenges. The global economic paradigm in which multinational corporations (MNCs) operate is thus an external “engine” for development – if it is “applied” where political, social and other conditions have not been prepared then local development could be substantially distorted.

Some developing countries have experienced the so-called “Dutch Disease” which is “a name applied to the phenomenon experienced by countries which have a rich endowment of minerals, the result of which is that the economy of the country becomes heavily reliant upon the revenues received from mineral sales, at the expense of the growth of other industries.” From the point of view of businesses, including mining companies, these factors are important for the predictability of investments (and are also indicators of countries’ performance): international competitiveness; efficient bureaucracy; a good tax system; training of people; a wide pool of human resources; exchange controls; labour productivity; government spending; level of corruption; infrastructural development; economic stability; crime; political stability. [1]

This is visible under the local circumstances of the case study. Ghana is rich in natural resources but has low technological capacity to develop its mining industry. Large mining companies can bring in the technological innovation needed but their operations should ideally be supported and controlled by national institutions. If these are not fully functional in terms of administrative capability and transparent governance, then there is the risk that the environmental and other consequences of mining activities may be considered “externalities” and therefore will not be adequately addressed by foreign companies. In some cases, the local economy may not have the capacity to absorb large amounts of income from mining activities, which may in turn fuel corruption [2].

Ghana has gone through rapid economic development (based on the resurgence of its mining industry since 1989) that was based on liberalization of the environment for private (foreign) investments. However, the benefit for the country was quite negative, as it has led to not only considerable social costs (growing conflicts with local mining communities) but also huge environmental costs. (Read [3], pp. 3-4)

Ghana is a beautiful country of West Africa with a tropical climate and wonderful national parks[4] protecting its environmental heritage.

Learn more from [5] And visit Google Earth (Google Earth – UNEP Atlas) to see the local context as well as UNEP Atlas of Environmental Hotspots to have an idea of main issues [6].

Ghana’s history is very closely connected with mining – from ancient times to the colonization period until the present day when economic transformation (and income) is largely based on the mining industry. Ghana’s official name until its independence in 1957 was the Gold Coast reflecting the fact that gold was most important and widespread mineral resource, replaced by bauxite and manganese only in the last century. Many wars for gaining control over the gold resources occurred throughout its history, followed by an economic struggle in recent times – gold is still one of the most important exports.

Actually, there were several periods in the “mining history” of Ghana. First, it is a part of the country’s tradition: indigenous people used gold even in pre-Christian times. Due to this fact, Ghanaians prefer to work in their small mines rather than be employed with some big company. But from 1933 these small miners were banned due to the Mercury Law which made the use of mercury for mining illegal [7]. Small scale gold mining based on this rather outdated and dangerous technology was criminalised up until 1989 (when the Small-Scale Mining Law was enacted).

In the colonial period, large scale mining activities were undertaken by foreign, especially British (Ghana was a British colony) investors. The period of independence was characterised by nationalisation of resources and the creation of state enterprises (e.g. the State Gold Mining Corporation (SGMC)) – state control lasted from 1957–1986 and ensured government revenues, employability and the control of resources but not economic efficiency. There was little investment and exploration of new resources.

After 1986, when mining sector reforms started (as a part of the macro-economic policy reforms of the economic recovery programme (ERP) initiated in 1983), considerable technological development occurred accompanied by exploration. Gold mining shifted from underground to surface mining and this caused, inter alia, enormous environmental impact. The country passed extensive policy changes to attract foreign investments that included “a conducive policy, legislative and administrative framework more conducive to business, and a thorough privatization programme”. These policy changes caused a shift in perception of the investment environment by investors and Ghana was recognized as one of the better countries in Africa for its most attractive geological and investment environment. (See [8]); (Read [3], pp. 7-16)

Here are requirements for your assignment: Scope and Structure of Your Text. You might work directly in this wiki, just follow the link to your interest group. For editing, just follow the technical help link.

The interest groups are as follows:

The mining industry is greatly dependent on the factors mentioned above (social, institutional, political – creating a predictable environment), and also other infrastructure (technical and other facilities – transport, …)

How do they cope with social and environmental challenges – as expressed by Corporate Social Responsibility (CSR)?

Needs: government should ensure economic growth but also all the long-term cultural development (etc.) of the country.

Its responsibility: sustainability in all aspects of development and local living standards.

Are civil society representatives really a partner for dialogue about long term visions?

How could research institutions and researchers themselves contribute to the sustainable development of the region? What kind of information is needed:

Globalization in world politics – restructured power. National governments should have the capacity to face pressures from MNCs: especially legislative capacity to prevent environmental damage (not regulated pollution aspects). There should be relevant institutional support for dealing with the problems generated. Any other “discovered” by us?

This page was created with support of the OP VK CZ.1.07/2.4.00/17.0130 Project - Interdisciplinary Sustainable Development Network