The printable version is no longer supported and may have rendering errors. Please update your browser bookmarks and please use the default browser print function instead.

All arrived safely at Most railway station apart from Katalin, who'll join us later if she can find her way by public transport to HSK. 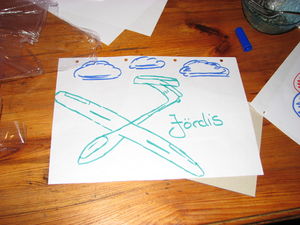 Stopped off at the Church of the Assumption of the Virgin Mary in Most and climbed the tower to view the city, Lake Most and the area of mining reclamation. Also stopped off at the Arborteum below Jezeří Chateau to view the Czechoslovak Army Mine operations and some of the resulting land slides there.

Made it to HSK around 17.30, everybody chose their room mates without any problem and tucked into a dinner of pasta, vegetables and chicken.

First study session was attended by Petr Pakosta, who greeted the students and wished the school well before Jana explained the week's activities and expected outcomes. Introductions were made to wrap up a long day for most students after many hours travel. Students were asked to draw an image that represented who they are or activity that they enjoy. Jordis, for example, drew a picture of a glider, as she had previously flown over the Ore Mountains with her father and that had been the inspiration to join the summer school. Nobody had the energy for a late night ;)