Students:Final outcome of student stakeholder mapping and analysis in the Ore Mountains

From VCSEwiki
Jump to navigation Jump to search
The printable version is no longer supported and may have rendering errors. Please update your browser bookmarks and please use the default browser print function instead.

The influence of coal mining on the Usti region

The following is an analysis of actors involved or affected in some way by lignite mining in the northern Ore Mountains in the vicinity of the Czechoslovak Army and Vršany opencast coal mines operated by Czech Coal and relating to their influence on the economic, social and environmental life of the region. The analysis is the result of work undertaken by students who attended the international Interdisciplinary Study Programme on Sustainability (ISPoS) summer school in the first week of September 2012. The actor analysis methodology used was based upon the stakeholder analysis tools contained in Zimmermann, A., Maennling, C. (2007)[1].

A map of regional actors was produced by identifying those most relevant, interviewing them during site visits and excursions (methodological instructions used), and analysing their relationships to one another and then depicting these in diagrammatic form. In addition to representing the key actors, the diagram includes those stakeholders who interact with them or who have an influence on them (primary and secondary stakeholders). The diagram provided a general overview of all stakeholders and allowed students to make some initial observations and hypotheses about the various kinds of influence the stakeholders have on the issue of lignite mining and the potential for proposing some type of reform intervention, as well as about the relationships and mutual dependencies. Students were able to draw conclusions regarding alliances, problematic relationships among stakeholders and their power relations.

Generally speaking, although the students did not have sufficient time to make a detailed study of the regional stakeholders and their relationships, the students nevertheless also uncovered gaps in information and areas of insufficient participation among actors. It showed which stakeholders and relationships students knew little about and about whom they required more information, and which actors should definitely be included in any proposed intervention.

Following several days of visits to various localities of importance to the issue of lignite mining in the northern Ore Mountains and several face-to-face meetings with significant local actors, the students constructed a list of the following stakeholders, dividing them up into core actors (the most important), primary actors (less important) and secondary actors (with marginal impact on issues at stake only):

All these stakeholders were depicted in concentric circles placing the three pillars of sustainable development in the centre, followed by the core actors and then the primary and secondary actors, as seen in Fig. 1. 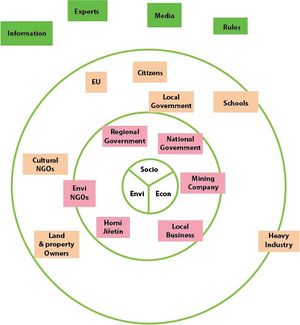 Mapping of stakeholder relationships and interactions

The next step was to analyse the various interactions and highlighting the different relationships between all the stakeholders. This creates what at first sight seems like a somewhat complicated map (see Fig. 2), even without every single interaction depicted, yet a closer reading revealed an elegant simplicity to the map which was able to be simplified further to demonstrate (see Fig. 3) the most critical relationships with the greatest impact on the region’s development. 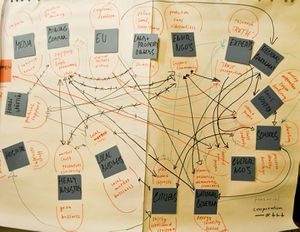 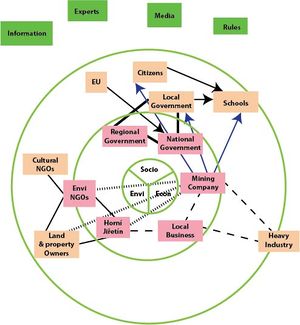 The first stage of the map involved mapping the obvious relationships and networking among specific stakeholders and briefly listing what their particular interest might be in that relationship. Examples (by no means exhaustive) were as follows:

See Fig. 1 for the initial draft of the map.

How were the relationships characterised?

The students determined that practically all of the relevant relationships were to some extent unequal and sometimes defined more by pecuniary interest which had the potential to act as a barrier to finding a common solution to the economic, social and environmental sustainability of the region. As noted above, several broken relationships between regional actors were also defined (as depicted in the map by the black lines with crosses through them). Of primary important here is that students found there is no common or joint search by two or more actors for solutions to the region's sustainability problems.

The wealth of Czech Coal, in the opinion of the students, for example, tended to have a distorting effect on some relationships. For example, it is able to fund and publish its own free newspaper, ostensibly for Czech Coal employees, but in reality available to all. It is able to fund or subsidise cultural and sporting events, such as attendance at the city of Most horse racing track, built on reclaimed land, and which might otherwise be beyond the financial means of the majority of local inhabitants. Czech Coal also dispenses its largesse to local educational institutions, the University of Finance and Administration based in Most, and is a significant contributor to primary education in the city of Litvinov through its sponsorship programme, Spolužití pro Litvínov (Co-existence for Litvinov) – Litvinov being a crucial stakeholder in the plans to mine lignite right up to its border. A further example is Czech Coal’s ability to finance and commission independent scientific research from its own research institute, Výzkumný ústav pro hnědé uhlí a.s. (Research Institute for Brown Coal).

As passions over the future of the region and whether to expand mining operations or not can become heated, relationships between the opposing camps have sometimes broken down altogether, e.g. Czech Coal and representatives of the town of Horní Jiřetín regularly clash over interpretation of statistics and research results, and accuse each other of intrigue and underhand tricks to win their arguments. Czech Coal representatives also refuse to deal with unnamed NGOs because of what they allege to be aggressive and dangerous anti-mining tactics. On the other hand, Czech Coal PR representatives told students that the company’s relationship with the state government was fraught with difficulty which left it unable to influence national policy on mining in the region.

Given the complexity and diversity of the relationships involved in the issued of lignite mining in the region, the students then simplified their stakeholder, as depicted in Fig. 3.

Thus a map of relationships was produced based only on core interests and the needs of actors that was simple and revealed that there were not particularly good interconnections between the environmental, economic and social sectors. In actual fact, when they sorted the actors and their relationships, the situation looked like Fig. 4, where there was a strict divider particularly between the environmental and economic spheres. But what they really needed was something that looked like Fig. 5, where sustainable development projects could be generated in the overlaps. 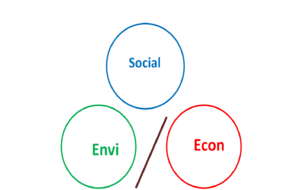 In order to find new ties between the different spheres, the students tried to establish new options for cooperation. To do this, they generated ideas relating to more idealistic forms of cooperation (aimed at mutual support) based on joint vision potentially shared by different actors. In a very productive brainstorming session, they drafted new possible interactions and identified potential project proposals, which in its rough draft form looked like Fig. 6 (different ideas surrounded each of the actors who potentially should be involved in the project under consideration). 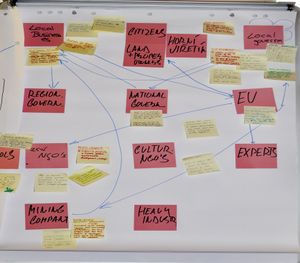 The final step in the analysis was grouping and generalising many of the ideas generated during the brainstorm session so that eventually eight possible new project interventions were identified that could help the region to develop on the basis of a new and democratic methodology. Wider strategic options were also produced and elaborated in more detail (and in addition, relevant stakeholders for cooperating on and implementing the projects were suggested. In brief, these eight proposed projects were:

2. Declaration of large scale protected area in the category Chráněná krajinná oblast (Protected Landscape) by the national government and support for tourism infrastructure

3. Regional identity: bring together local cultural NGOs and schools with German cultural NGOs under the auspices of the EU to create a “relationship with place” based on its specifics: mining history and German Sudeten heritage, etc

4. Regional handcraft and food products branding: establish an alliance of local businesses, citizens, cultural NGOs and national government to support and promote a branded image of the region based on local products that characterize the region: fruit gardens, wine industry. Locally manufactured quality products would thus be promoted.

5. Recultivation: ally experts with environmental NGOs, local citizens and the city of Most to discuss how the region should be recultivated based on bottom-up participative processes rather than top-down prestige projects. New innovative ideas could be raised in the contexts of sustainable “landscape design” which should be more integrated into societal demands.

7. Transform ‘business as usual’ approach: promote innovative thinking about the region’s potential by commissioning economic impact reports in alliance with government and business on alternative scenarios for the region if mining was not continued. Different actors such as environmental NGOs, mining companies, foundations etc. should be involved in the process – a specific role would be played by technical universities which could be considered as incubators.

8. Enhance management capacities: education and training among regional and local government officials and NGO workers to increase funding application and project management skills. Local universities should be involved in the process.