Why is water so important to us? Firstly, it is one of the fundamental requirements for human physical survival along with oxygen, food, shelter and sleep. It is one of the basic human rights guaranteed by the United Nations. According to the UN Human Rights Council, "the human right to safe drinking water and sanitation is derived from the right to an adequate standard of living and inextricably related to the right to the highest attainable standard of physical and mental health, as well as the right to life and human dignity".[1]

For basic physical survival, a human requires something between 2 and 5 litres of water per day. If we add the water needed for cooking and washing, then a Bedouin tribe from the Middle East can make do on roughly 20-30 litres of water per day, while sedentary populations require an absolute minimum of 100 litres per person a day for safe hygiene and an adequate standard of living[2] Domestic households in developed countries typically require about 250-350 litres a person in Europe and over 500 litres in North America.

But it is not only a basic factor in the maintenance of our lives and the life of every organic life form on the planet, it is also essential to every other aspect of human life from cooking and cleaning, to transport and energy, to climate and food production, to carbon sequestration (the oceans act as a vital carbon sink and hence are becoming more and more acidified), to our religious rituals (think of the Catholic Church's use of holy water or the ablutions required of Islam before prayer), to our physical landscape (our coastlines, lakes, rivers, glacial valleys, etc) and to our mental landscape (our art, poetry and literature is full of water images, e.g. Stauss's The Blue Danube, Smetana's The Moldau, etc).

In every corner of the modern globe, water is to a greater or lesser extent a crucial raw material for practically all economic activity. Around the planet, up to 92% of water is used for non-household purposes, mostly in the agricultural sector. Growing a sufficient amount of food for a human adult requires around 300 metric tons of water a year, i.e. nearly a ton a day.[2] If this water does not arrive through natural precipitation, then it has to come via human constructed irrigation conduits – irrigated agriculture is responsible for 69% of global water consumption.

Water Stress Around 2000 A.D. By WaterGAP

Industry also consumes enormous amounts of water for washing, diluting, cooling and production of steam. Highly industrialised economies therefore harness most of their water for such purposes where water often also provides an important source of energy via hydroelectric power generation in large-scale dams, as well as a vital means of transport. As the natural habitat for planetary piscine life all countries that are able heavily exploit their water resources as a source of food, and for the countries with the most highly developed economies, water is a natural draw card for recreational and tourism activities.

All these activities have a great impact on the world’s water reserves and in particular on its limited resources of fresh water. As the world economy becomes more and more globalised and integrated in order to meet the demands of an ever increasing population, water consumption increases accordingly, placing pressure on the drinking water supply. In “water poor” nations, competition increases between people and commercial activity over dwindling supplies of potable water – water is diverted toward irrigation for expanded food production, to upmarket hotels and golf courses to cater to rising numbers of wealthy tourists, and to new industries to provide the consumer products demanded by the global market. But the impact is not only on the increased volume of water used. Expanded agricultural activity not only consumes more water but also pollutes remaining water supplies with the run-off of chemical fertilisers, while large scale irrigation schemes can destroy natural water ecosystems; greater industrial consumption of water creates greater amounts of waste water that can overwhelm sewage and water purification plants; rapidly expanding populations in water stressed countries place overwhelming pressure on water delivery systems; and overpumping of groundwater supplies can dramatically increase salinity levels and render water unfit for human consumption.

In terms of water stress levels, it is generally considered that countries with annual supplies of 1,000-2,000 m3 per person are water-stressed, with 1,000 m3 thought to be the minimum per capita requirement of a moderately developed country.[2] Societies with less than 500 m3 per capita are said to suffer from absolute scarcity, so this "lack of water then requires application of expensive technologies and becomes a constraint on food production, social and economic development, and protection of natural systems.”[2]

It is generally accepted that we face a global water crisis, elements of which can be summed up as follow:[5]

Water in the Middle East

The climate in the Middle East is classified as ‘arid’, with low precipitation and high evapotranspiration, i.e. a large swathe of the region receives less than 200mm of rainfall per annum and potential evaporation of surface water of over 2000mm. [6]

It has very few rivers: the Euphrates and the Tigris are very important sources of water for the whole region, while the shrinking levels of the Jordan and its tributaries are of use to the west of the region only.

Relative decline of water supplies due to more frequent droughts and the burgeoning population has increased political conflict. It is expected that the population of countries in the Arabian Peninsula, for example, will double over the next 50 years to 600 million. Some of these countries are already extracting over 75% of their total renewable water resources. [5] Israel has about 300 m3 of fresh water per person per year and Kuwait a mere 1 m3, while in the Gaza Strip in Palestine it is estimated that 90% of the local water supply is undrinkable as a result of pollution and increased salinity. [6] This problem is aggravated by the continuing historical tensions between the Arabs and the Israelis. Tensions over water even played a part in the Arab-Israeli War of 1967 due to a dispute over the diversion of the River Jordan and the sabotage of water pipelines[7]; the post-war gains of Israel provided it with control over the headwaters of the Jordan and the aquifers of the West Bank and hence strengthened its overall geostrategic position in the region. [6] But despite such conflicts, water can also serve as a point of agreement; the Israeli-Palestine water commission, for example, is the only joint committee created by the Oslo Agreement that still exists today, while Israel and Jordan have worked together for years on managing the Sea of Galilee located in Israel but near the Yarmuk River, which demarcates the border between the two countries. [7]

Jordan is classified as a water scarce or water poor nation and is ranked number ten in the world in relation to its water shortage.[8] It has been facing water deficits since the 1960s. In 1996, Jordan had 175 m3/y per person, which was 20% of the world’s water poverty level (anything below 1,000 m3/y classifies a country as water-poor). If current trends continue, by 2025 the water supply per capita will fall to 91 m3.[2] 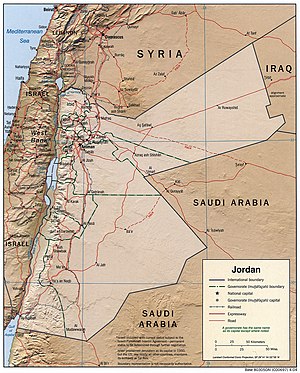 The amount of rain that falls in Jordan in the north is mainly influenced by orography (the topographic relief of mountains), with rainfall in Galilee and Jerusalem (which are about 800m above sea level) exceeding 600mm per year, while rainfall in the Jordan Valley (in the range of -400 to 0m) is less than 200mm per year[7] (as a measure of how little water this is, a viable level of rain-fed agriculture is 400mm per year, i.e. it’s impossible to farm below that level).[5] By way of contrast, the south is exceedingly dry and rainfall is not influenced by mountain topography. Ma’an, for example, is 1,069m above sea level but receives less than 100mm of rain per year. [7] This north-south contrast is the result of the differences in trajectories of depressions that bring most of the winter rainfall to the Middle East: in the north they bring moist Mediterranean air and therefore cause it to rain, while in the south the same depressions bring dry desert air from the Sinai and hence almost no rain. [7]

Climate change will probably bring a reduction in rainfall at the peak of the rainy season by the end of the century.

Jordan has three large rivers, the Jordan, the Zarqa and the Yarmouk, but all have become highly undependable. The River Jordan is the main water source for both Jordan and Israel, but as it is saline (salty), it is not suitable for drinking or irrigation without undergoing filtration first. It is also small in comparison to other major rivers – the natural 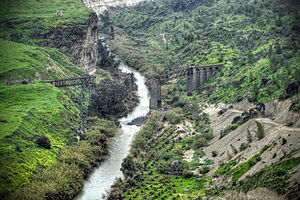 discharge of the Jordan river basin of approximately 1,500 million m3 is 65 times less than the Nile’s and 400 times less than the Mississippi’s.[7] There is also huge variability in discharge year on year from the River Jordan, with reductions of up to 40% in drought periods. It has also been reduced to “nothing more than a creek” [8] as a result of upstream 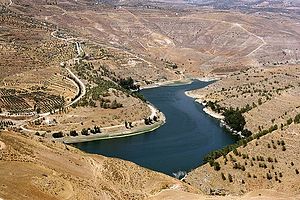 diversions and over-pumping by Syria and Israel.[2] The River Zarqa meanwhile receives large amounts of municipal, industrial and agricultural effluent, making it close to unusable for domestic and irrigation purposes during the dry season, while the River Yarmouk, while less stressed, is also a receptacle for municipal wastewater. [8]

With relatively few surface water resources available, there are not surprisingly few dams and reservoirs in Jordan. The largest reservoir is the King Talal Dam, but it faces the dual problems of erratic river flows that reduce the trapped water level below the dam's capacity of 86 MCM, while pollution from factories dumping wastewater into tributaries leading to the dam raises it salinity and chemical and metal levels.[2]

It is groundwater stored in aquifers rather than surface water that provides Jordan with most of its domestic water supply. It is the only source of water in some areas of the country. The depth of groundwater is highly variable, ranging from 2 to 1,000m, and the main reserves are found in the south with a long-term safe yield estimate of about 90 MCM per year for 100 years.[6] The total long-term safe yield of all renewable groundwater resources in Jordan from 12 groundwater basins comprising several groundwater aquifer systems has been estimated at 275 MCM.[2] However, exploitation of this water resource is not without its problems, as salt levels vary between aquifers from 170 to 3,000 parts per million as a result of surrounding geological formations (calcium, magnesium and sodium leech into the water to various degrees, making the water “brackish”).[6] “Each source of groundwater needs to be considered independently in order to achieve effective management of the risk of salinity associated with each formation’s chemistry.”[6] There are also non-renewable fossil water supplies (i.e. resources that are not recharged through rainfall) that are being extracted at a rate of 77 MCM.[9]

Current water use exceeds the renewable supply, so Jordan faces a constant and growing water deficit. In other words, the present rate of water extraction from all sources is unsustainable, and prospects for increased availability in the future are not good. In 2010, the total water demand was 1,383 MCM, while the total supply from all sources, was 1,054 MCM, creating a total deficit of 329 MCM. By 2040, it is estimated that due to population and economic growth demand will increase to 2,236 MCM, but supply will expand to only 1,549 MCM, leaving a huge deficit of 689 MCM.[8]

There are three main uses for water in Jordan: municipal, industrial and agricultural. Agriculture is the single largest user of water, both from surface and aquifer resources. Irrigation water consumes 77.5% of the total water demand, while municipal and industry requirements make up the rest.[8] This is despite the fact that agriculture represents only 3% of Jordanian GDP.[9]

There are many websites dedicated to water shortage issues. Here is a small sample:

The following academic papers can be found by using academic search engines or databases like www.scholar.google.com, www.scopus.com or www.sciencedirect.com, etc.