The theme of least developed countries (LDCs) and developing countries is important within the globalisation debate – they are often considered to be more-or-less passive spectators to, and some might say victims of, global economic development fuelled by the predominant growth-at-all-costs and market-driven economic paradigm. Forestry and agriculture naturally continue to be the primary source of resources and income for people living in LDCs, yet are subject to huge pressure from the forces of globalisation whether in the form of planetary environmental challenges, access to international finance and markets, the emphasis on cashcropping ahead of internal food security, global conflict, and acceptance of aid and Structural Adjustment Programmes, among others. Ethiopia and the state of its forests is a case where we can see these pressures played out.

This is a complex phenomenon and can be viewed from different (disciplinary) perspectives. Our viewpoint is that it has a direct impact at the local level – on the quality of life in diverse parts of the world.

Economics is the driving force of globalisation processes. However, the economy looks different from a global as opposed to the local perspective: due to on-going trade liberalisation and increasing opportunities for investment across national borders, the global production and distribution network has become even more interconnected, its efficiency has (arguably) increased, and it no longer takes heed of boundaries and borders; the globalised economic maximizes its profit but also delivers cheap goods to underdeveloped regions. However, from the local perspective, globalised economic processes might hinder local initiatives as it neglects the local specific context – social, cultural and political conditions, and of course the traditional economy based on those same conditions. In the past, tariffs would have been imposed on imports to developing countries in order to nurture and incubate local industry and hence protect it from foreign competition, just as new industries had once been protected in developed societies, but the demands of the global economy and the World Trade Organization require the opening up of markets in developing nations to the full force of global competition. Globalisation in a certain sense means universalization, and its economic imperatives can destroy local diversity, which often means neglecting local consumption needs or patterns. Something of this phenomenon can be perceived in the situation as it pertains today to the state of forest cover in Ethiopia, although other global themes are present also, not the least of which include the effect of global conflict and population growth.

The problem of poverty and deforestation in Ethiopia

Ethiopia is one of the poorest countries in the world, and its poverty and land and resource degradation seem to be part and parcel of the same vicious circle. The supreme irony is that Ethiopia is actually a country with a very diverse environment and rich biodiversity and unique ecosystems (the Ethiopian Highlands, for example, elevate the country, which lies close the equator, to give an unexpectedly temperate climate, so although it lies in tropical altitudes, its climate varies between cool in the highlands and warm in the lowlands). "Ethiopia relies on its diverse biological resources for its socio-economic development, and these resources are now under severe pressure."[1]

Thirty-nine percent of the population lives below the poverty line, only 34% of the rural population has access to an adequate water source, and the average life expectancy is a low 59 years (although these figures have been improving in recent years thanks in part to a relatively high GDP growth rate of 7.5%). Agriculture accounts for about 46% percent of GDP, of which forestry plays a part, although some estimates put direct losses of productivity from deforestation and land degradation at at least 3 percent of agriculture GDP.[2] With a population estimated in 2012 at over 84 million[3] (making it the 14th largest country in the world) and a growth rate of 2.1 percent this is a critically important figure.

Deforestation and the resulting environmental degradation is a major problem in the Federal Democratic Republic of Ethiopia and a key factor challenging food security, community livelihood and sustainable development. In the late nineteenth century, approximately 30 percent of the country was covered with forest.[4] But the clearing of land for agricultural use and the logging of trees for fuel slowly changed the look of the country’s forest cover and which sped up considerably as the 20th century progressed. Between 1955 and 1979, over 77 percent of the country’s forested area disappeared and it continues to lose 8 percent of its remaining forests annually.[5]

Ethiopia located on the globe 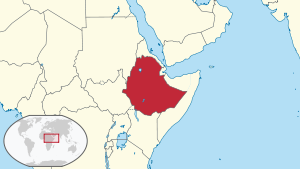 Ethiopia in its region 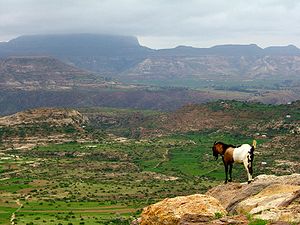 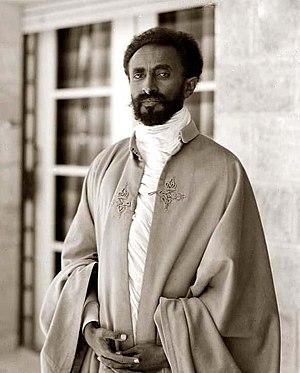 Why are forests so important to Ethiopia?

Ethiopia has a rich and varied history, but its modern history which arguably laid the foundations of its long and bloody conflict in the late 20th century and its current position as one of the poorest nations on the planet began with the first overt European interference in the country’s affairs in the mid-19th century. Until 1936, Ethiopia had avoided the fate of most other African nations during the Europeans’ scramble for African colonies, although it was subject to military attacks, first by the British during an 1868 expedition to Abyssinia to rescue British nationals imprisoned by King Tewodros II, and then the Italians, who were desperate to keep up with the British, French, Belgians by carving out their own little piece of empire on the continent. Italian companies acquired land in Eritrea on the Red Sea board of Ethiopia in the 1870s and 1880s and then occupied it with Italian soldiers in 1888. Under Emperor Menelik II, the Ethiopians signed the Treaty of Wuchale with the Italians in 1889, granting them part of Northern Ethiopia in return for guns and ammunition to help fight the Egyptian Sudanese. Eritrea was effectively recognised by Ethiopia as an Italian colony from this date (and up until Mussolini assumed power in Italy in 1922, when the new administration stressed the racial and political superiority of Italians, "[t]he local population shared in the benefits conferred under Italian colonial administration, especially through newly created medical services, agricultural improvements, and the provision of urban amenities..."). [6] However, the Italians said this also gave them power over all Ethiopia, but Menelik demurred, saying the native Amharic language version of the treaty said no such thing. Tensions came to a head in 1896 when the two nations went to war and the Italians were completely defeated at the Battle of Adowa – the first time a European army had ever been beaten by an African military force. The Italians recognised the full independence of Ethiopia as a result, although they never forgot their humiliation and returned to militarily intervene in Ethiopia again in 1936 under Mussolini.

Menelik was followed in quick succession by his grandson Lyasu V in 1913, who was deposed by the Ethiopian Christian nobility three years later because of his Muslim ties, and then Menelik’s daughter Zauditu, while her cousin, Ras Tafari Makonnen, was made regent and heir apparent. After the death of Empress Zauditu in 1930, Ras Tafari succeeded to the throne as Emperor Haile Selassie I (Haile Selassie is worshipped as the reincarnation of Jesus by adherents of Rastafarianism).

In 1935, the Italians, who had been waiting for an opportunity to take revenge for Adowa, invaded. Haile Selassie, as the only independent black monarch in Africa, appealed to the League of Nations for aid, but the western powers failed to help and Ethiopia was formerly annexed by Italy in 1936, with Selassie going into exile. He returned in 1941 after the British defeated Italian forces in Africa during World War Two.

In a spurt of energy after the war, Selassie promoted the modernisation of Ethiopia. He opened the first university in Addis Ababa in 1950, introduced a constitution in 1955 that expanded the powers of parliament and improved relations with other African nations by helping to establish the Organisation of African Unity. Unfortunately, Ethiopia became caught up in a war from 1961 with the province of Eritrea, which had been an Italian colony for many decades and which had then been annexed by Ethiopia in 1943. It had been self-governing under a federal system until 1961, when its parliament was shut down by Selassie and the Ethiopian language Amharic made compulsory at all Eritrean schools. This war lasted more than 30 years until Eritrea gained full independence in 1993.

Selassie’s advancing age, his increasing distance from the daily life of his subjects, and the sense among a growing number of Marxist-oriented Ethiopians during the climate of the Cold War that the conflict with Eritrea was imperialist in nature. Inflation, corruption and famine added to the growing unrest in the country and eventually military coup was staged by Marxist officers in the army under Mengistu Haile Mariam in 1974. The last emperor of Ethiopia, Haile Selassie, was murdered in 1975.

Power was assumed in 1974 by a provisional administrative council of soldiers known as the [wikipedia:en:Derg|Derg], with Mengistu as head of the newly Marxist state and Derg chairman. This triggered the Ethiopian Civil War that was to last until 1991, with the Derg imprisoning or exterminating many thousands of its political opponents, and continuing to prosecute the Emperor’s war against the rebel province of Eritrea, as was as the province of Tigray. Under the Derg, Ethiopia became a client state of the Soviet Union, and as a result also became the most militarised state in the region. It was thanks to military aid from the Soviet Union, Libya, GDR and North Korea, and 17,000 professional soldiers from Cuba that Ethiopia was able to fight off an invasion by Somali forces in 1977.

At the same time, the Derg attempted to follow through on its Marxist philosophy by redistributing land to the peasants. However, mismanagement, corruption, and wholesale hostility to the Derg's violent rule combined with the debilitating effects of constant warfare resulted in a precipitous fall in agricultural production, and it is during this period that deforestation in Ethiopia began to rapidly escalate. Although Ethiopia has generally long been prone to drought, few were prepared for the scale of drought and famine that hit the country in the mid-1980s, in which up to eight million were affected and one million may have died.

Mengistu was finally overthrown in 1991 when the Ethiopian Peoples’ Revolutionary Democratic Front captured Addis Ababa and the Soviet Union under Mikhail Gorbachev failed to intervene on the Marxist government's behalf. Under a transitional government, a new constitution was written in 1994 that established a bicameral legislature and judicial system. The first ever multi-party elections then took place in 1995 with Meles Zenawi elected Prime Minister.

Democracy was not, however, accompanied by a permanent peace. A border dispute with Eritrea in May 1998 led to a war that neither side could afford and which lasted until 2000, the same year that new elections were held that resulted in only 12 seats being won by the opposition. New elections in 2005 were greated disputed, and those in 2010 again returned Meles Zenawi as Prime Minister. In mid 2011, after the rainy season failed two years in a row, East Africa experienced its worst drought in 60 years.